When a technological benchmark is reached, the world resets itself to adopt it. Think of GPS, the satellite system that guides billions of devices every day or the very little discussed firmware that runs in routers and other digital devices. You don’t see it, but they run your life. ReactJS, the Facebook core coding block, is having a go and gobbling development by large chunks. Should we worry about it?

Disclaimer: I won’t make a technical analysis of React here. If you look for one, here is a decent one, among the gazillion others in the Web.

Numbers usually don’t lie. ReactJS reigns supreme. It’s fast, adopted by all browsers and has tons of advocates and its technical prowess seems to face little criticism compared with its adoption rate. Why would one raise eyebrows for such a useful, handy tool? 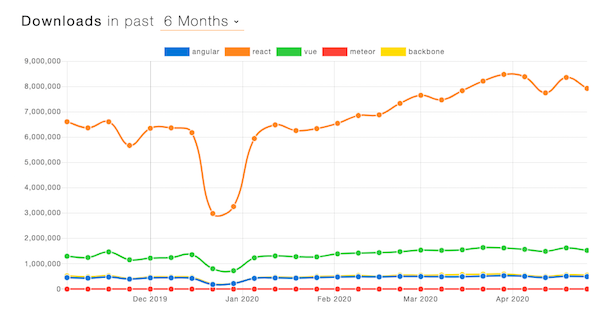 The Web is becoming impregnated of React given such heavy use. During the last six months, the only drop React have we caused by a world being taken by assault by Coronavirus. And after a few weeks, it regained the pace and the acceleration rate of its growth. It is digging itself into the foundations of the Web.

The reflection here is not technical but conceptual. The increasing React adoption rate is making the whole environment vulnerable to React. You will say that is open source and highly transparent – which is true. However, it’s also true that no matter how transparent it is, it carries Facebook DNA with it. So, here goes a little story.

From 2010 and onwards, Facebook stopped being a place to post photos of babies and dogs to become an oiled, highly-efficient traffic machine. As time passed by, its exponential growth rate left an unimaginable power on Mark Zuckerberg’s hands. By swallowing user attention, the news industry became dependent on it.

The company certainly did little to scare networks and newspapers. On the contrary, it engaged aggressively to onboard news outlets giving them huge traffic loads with small features and optimization. It was one of the best-made marketing stories in the world: it sold itself as a middleman that would charge nothing and would provide massive audiences to hear what the news industry had to say.

The demands increased: first, it determined the technical rules of engagement to get more traffic (how to embed images, how to make headlines, how to retain the user, how to do everything). None seemed to care. In journalists’ conferences or posts from news companies and journalists, the “help” from Facebook was always lauded, and the audience capture strategy of almost everyone was based on what it was demanded to earn likes. Publications were born like these. Think of all Gawker brands or Buzzfeed. Silliness, which is hard to be counted as a virtue, became king.

And as Facebook dependency increased, the company began to be more specific. First, it boosted native video posts. If by 2015, you had mastered the way to do videos, Facebook would be a genuine helper. Not only videos gained massive traction, but it “contaminated” the rest of the content with views, likes and comments. Live FB broadcasts, one of the last Facebook hits before the honeymoon was over, suddenly took over, and millions of interventions were made every day.

The “partnership” ended by the end of 2016. In his traditional new year’s self-imposed goals, Zuckerberg promised to “fix” Facebook. None understood immediately what had happened or what was coming. Still, weeks later, the company announced that news items would drastically lose relevance (i.e. would be given a fraction of the average traffic) to prioritize family and friends’ stuff.

What had happened was the Cambridge Analytica scandal. Although the case broke only in March 2017, by the end of 2016, the company had a notion of the extension of the damage. Facebook had inadvertently or not been instrumental in manipulating, first Brexit and then, Donald Trump election. Days after Trump had won his election, Zuckerberg said that the accusation that Facebook had helped Trump was a “pretty wild idea”, but it’s unlikely that he was unaware that Cambridge Analytica had significantly manipulated users. Oh, yes, and by the time that The Guardian had revealed how CA had distorted reality to subvert truth using Facebook, Facebook traffic to news outlets had fallen between 70% and 90%. Videos, memes, live broadcasts, images, nothing would suffice. Social-generated traffic crumbled because FB (and Facebook properties like Instagram) was the main driver of the social locomotive

This history is not one of accusation, but a warning about how corporate needs and decisions have nothing to do with what’s right to do. Zuckerberg, despite his anodyne comments and reactions after the scandal, mainly shielding the company of any guilt, probably was shocked like anyone else. He didn’t choose to be mean or irresponsible. The decisions taken by Facebook to contain the damage were a by-the-book corporation practice: shareholders interests come first, fairness and commitment, far, far later.

React is not a Facebook property, but is inextricably liked to it. Developers around the world adopt it because it is an excellent solution in terms of performance, use learning curve, supporting tools and data binding capabilities, but the concern lies elsewhere. React is a library made with commercial purposes and will be tied to this goal forever, even if useful for many other purposes.

Then, the question: what will React become if Facebook’s interests demand it to change? What if it becomes a privacy threat? Who will have the final say? Yes, none is forced to use React, but what if every single React app in the world needed to drop it? When riding on massive Facebook-generated traffic, news companies paid little attention to the information architecture or to how weak and dependent was their position. As the current Coronavirus pandemic shows, problems may show up all of a sudden. What if that would be the case with React?

I am sorry if I am gloomy here, but it is a story that repeats itself over and over. When a company becomes dominant in the market, its principles are far easier to be dropped than its revenues. React is a great tool and Facebook gave no signs that it will drop it or it will manage it perversely, but the risk is to become dependent on a gadget linked to a corporation. Complain after the event is far harder than negotiating before.

My name is Cassiano and I am a Full-Stack Developer. Stories rule our life, even - or especially - when we don't realize it. When I am working, I tell them with code. Here, I tell them in text.

We use cookies to ensure that we give you the best experience on our website. If you continue to use this site we will assume that you are happy with it.Ok